“Leading the family business; what it’s like to be the boss as a next gen” 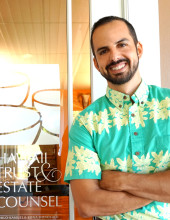 ohn Roth formed Hawaii Trust & Estate Counsel in April of 2014 after six years with Hastings Laun & Roth.  Prior to that, John was associated with Case Lombardi & Pettit on Oahu.

John has taught Estate Planning as an adjunct law professor at the William S. Richardson School of Law at the University of Hawai`i–Manoa, and occasionally lectures in several other law courses there.  He also periodically teaches the Business Law course at the University of Hawai`i–Hilo.  John is also a frequent speaker at seminars for lawyers and other professionals in the areas of estate planning, probate administration, law firm management, and legal ethics.  His publications include co-authorship of the Hawaii State Bar Association’s Estate Planning Forms Manual (2012) and Hawaii law section of the American College of Trust and Estate Counsel (ACTEC) Report, Comparison of Domestic Asset Protection Trust Statutes (2014).

In 2016, John was recognized as one of Hawaii’s “40 Under 40”,  an annual award given by Pacific Business News to 40 of the most influential professionals under 40 years old, in the State of Hawaii.  John has served as president of the Young Lawyers Division of the Hawaii State Bar Association, is currently an officer of the HSBA’s Estate Planning Section, and cofounder of the Solo & Small Firm Section.  He is past president of the Rotary Club of North Hawaii and served on the board of the Parker School.  John currently serves as president of the North Hawaii Hospice board; and on the advisory board for the West Hawaii Fund of the Hawaii Community Foundation.

John earned a B.S. degree in Business Communications from the University of Kansas in 2003 (Phi Beta Kappa), and joint J.D. and M.B.A. degrees from the William S. Richardson School of Law and Shidler College of Business at the University of Hawai`i–Manoa in 2007.  He grew up on Oahu where he attended public elementary schools and graduated with honors from Punahou Academy.

The Next Generation Peer Group is a pilot program that was developed to help next gen-ers transition into leadership roles within their family businesses by exposing them to various issues that may arise and providing a safe environment for in-depth discussion of business and personal matters. There is an additional annual fee to participate in this pilot program. The fee is $100 for the first person and $50 for each subsequent person from an FBCH member company. The annual fee covers quarterly Next Generation Peer Group meetings from July 1 to June 30.